I’m long overdue for a series about my activities representing the GNOME Foundation at conferences and events within the past year. I’ll start off with my time at GNOME.Asia.

I’ve attended two GNOME.Asia conferences so far, and this year’s conference was a different format from last year’s since it was co-hosted with COSCUP (Conference for Open Source Coders Users and Promoters), and OpenSUSE.Asia.

The conference was held in Taipei City, Taiwan, and I was able to attend and speak about the new things happening within the GNOME Foundation this year, such as the Foundation’s expansion plans and the positions we are hiring for.

In this blog post, I’d like to share a little more about the highlights of the conference and some of the key takeaways I had from it.

Meeting more of the GNOME.Asia committee in person

Meeting and learning from OpenSUSE

One of the great things that resulted from co-hosting the event, was spending time with many OpenSUSE community members, including some of the OpenSUSE Board of Directors. I was able to chat with Ana María and Simon about how their Board is involved in allocating funds, and learning more about the type of things that their Board handles. One of my takeaways is that OpenSUSE tends to place a lot of trust in their community, so credible requests for marketing funds are generally granted. This seems to be working well for them. While I think that the GNOME community has made some great strides recently towards its marketing activities, for example with providing a budget for things like GNOME events, there’s room for improvement.

One of the things I’d like to help do in the upcoming months is to make it easier for people to know about and access the marketing and events budget the GNOME has. I think that the future Program Coordinator we are hiring for will be a huge help here as well.

A handful of GNOME contributors from outside of Asia flew in once again this year, which I think was really important. Typically, GNOME.Asia attracts a lot of users (or potential users), and promoters. While this is great, it would be awesome to also get more newcomers interested in contributing to other GNOME project teams. Having core contributors from various projects within GNOME attend GNOME.Asia helps attendees of the conference meet people they will be interfacing with if and when they join the global GNOME community.

Kat and I gave a keynote speech together where we talked about the importance of free software, about GNOME, and about how to join our community. As a result, I had some really good bonding time with her over writing the keynote speech, and later once in Taipei, attending midnight Board calls. We have a lot in common around wanting to help improve events at GNOME and strengthen ties with community members all around the world. Kat is working on some great initiatives to help standardize the conference bidding process and to help make it easier for interested people to organize GNOME conferences.

Max and the local organizers put together a great tour of Taipei, where they organized a bus to take us to the national museum, an amazing dumpling lunch, and Taipei 101 (one of the world’s tallest buildings). Unfortunately, there was limited space on the bus, so not everyone interested was able to join. However, this made the trip more intimate and allowed the participants to get to know each other better.

Conferences that include some kind of touring activity have a level of thoughtfulness and intimacy that really makes participating in them special — not only because you get to become more familiar with the people that surround you, but also with the places and culture that surrounds you. I’m really glad that our conferences tend to have this aspect! 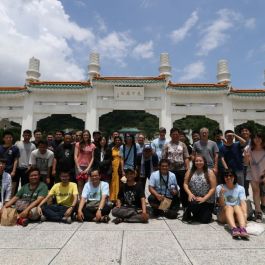 Group shot on the tour day in front of the National Palace Museum. 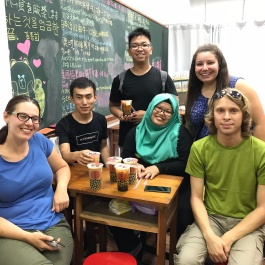 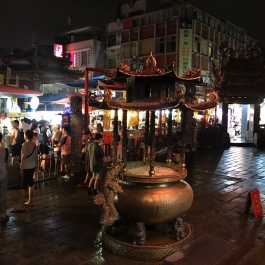 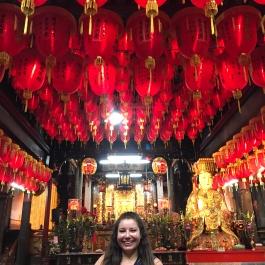 Visiting a temple while at the night market 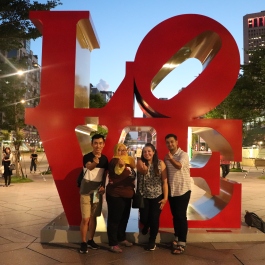 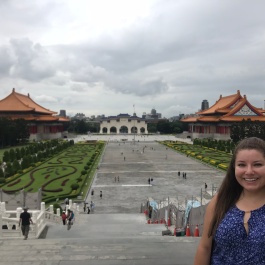 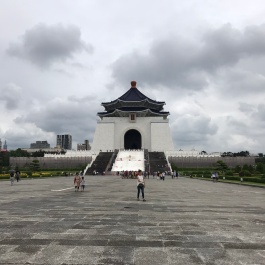 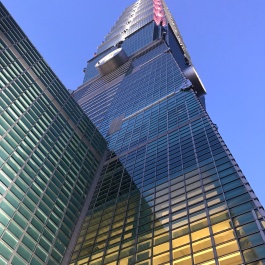 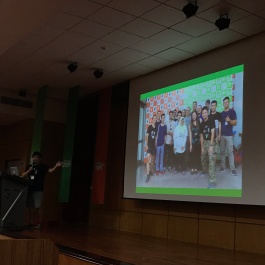 The closing ceremony included highlights from all three communities: GNOME, OpenSUSE, and COSCUP. 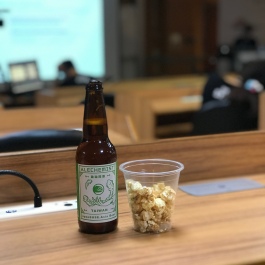 We really need to get ourselves some GNOME Beers… these OpenSUSE ones were awesome! 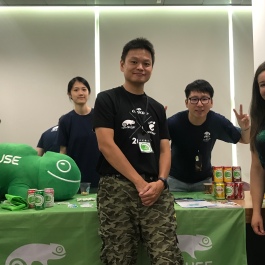 Hanging out at the OpenSUSE booth and learning from their crazy cool marketing efforts, and of course, their awesome community! 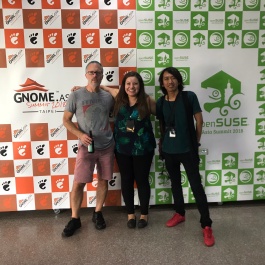 With Matthias and Haris! 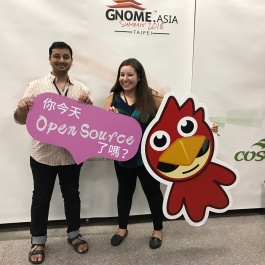 We weren’t sure what the sign said, but it said open source so what else matters? 🙂 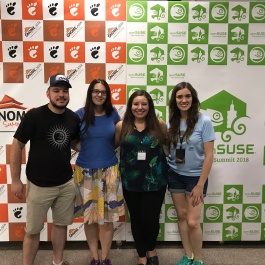 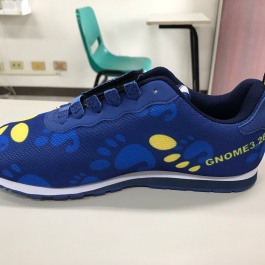 The coolest release day shoes you’ll ever see. These are the product of Iwan S. Tahari’s company, which designs awesome shoes like this with Inkscape and other free software tools. 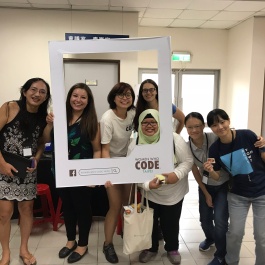 It was great meeting the Girls Who Code Taipei group! 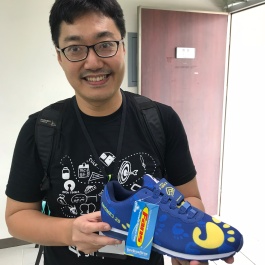 Iwan Tahari showcasing some of the shoes he’s designed using Inkscape and other free software. 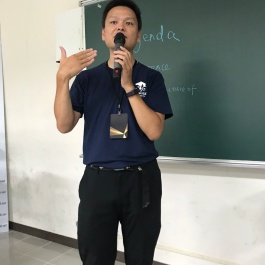 I love watching Max work his magic! Here he is at the GNOME BoF getting the group to participate 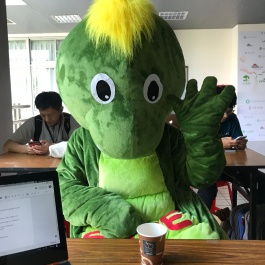 This friendly guy roamed around making us all smile 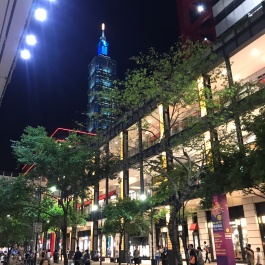 Another view of Taipei 101, one of the world’s tallest buildings. 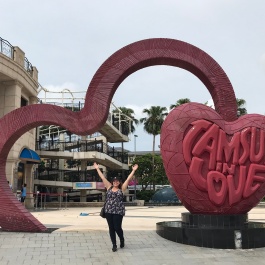 I loved my time in Tamsui while touring around Taipei 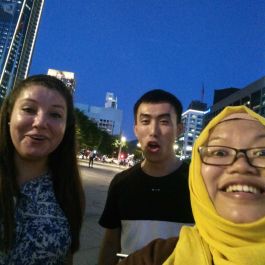 Meeting old friends at conferences is simply the best 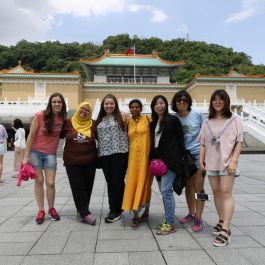 It was great to meet (and see again) some of the awesome women in free software. 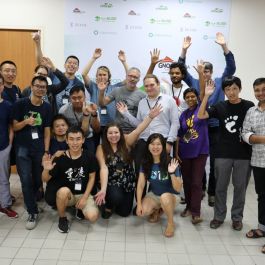 Understanding the trade-offs with a co-hosted event

While I really enjoyed meeting members outside of the GNOME community, a trade-off is that there seemed to be fewer people attending GNOME-related talks. The range seemed to be somewhere between 10 – 60 people at any given talk, even for keynotes. In contrast, last year’s conference seemed to be attract audiences of about 50 – 200 for any given talk.

In the future, it may be nice to organize some BoFs along with members from the communities that we co-host with as it may encourage us all to cross-pollinate more during talks and work with other community members in general.

We had a GNOME BoF this year that centered around organizing GNOME.Asia and fostering a community in Asia. Unfortunately, while I was physically present, my jet lag hit me really badly and I was unable to really participate.

The structure of this BoF was different than others I’ve attended since it was announced as a general GNOME BoF. Typically, BoFs I’ve attended have been centered around various topics of interest, such as “Flatpak,” “Engagement,” “Docs & Translations,” etc. The other difference was that each community’s BoF offered participants dinner (e.g. OpenSUSE provided sushi and GNOME provided pizza), since it was late. This drew people to participate in BoFs after the conference ended for the day.

It would be great to have more planned sprints and BoFs that are similar to the ones at GUADEC. This could encourage new contributors to core areas of GNOME, since newcomers can get involved. If this part of the conference is planned for, GNOME.Asia might end up getting longer. Right now it’s a weekend event with the next day being an optional tour, but if we move to a new structure that includes BoFs, it could perhaps be 2 days of talks and at least 1 day for BoFs — or perhaps there could be at least one half day of BoFs to start off.

Unfortunately, there weren’t any newcomers workshops this year, but they have been great to have in the past and I hope that we can hold them in upcoming years. GNOME.Asia tends to attract a lot of students and newcomers, so having lots of information about internships and how to get involved is something we should absolutely do.

Taipei was a great place to host the conference, and Max and the local team did an excellent job! During the conference, Max made an announcement that he is stepping down from being the chair of the GNOME.Asia. For all of you who know and love Max, don’t worry — he isn’t disappearing, but he will join in a more advisory capacity like Emily has. Max has so much experience and is great at representing GNOME in Asia, so while it’s sad that he won’t be as involved, it is great news that he will still be around! 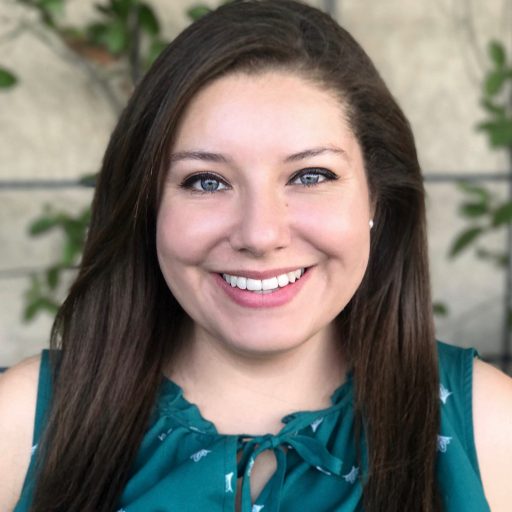